There have been a lot of hits on the blog lately looking for spoilers about Owen. Most of my spoilers have already been written in the comment section of previous Torchwood posts. So let me just give you searchers the highlights (and no I won’t ruin the episodes b/c I think you should watch them; this season has been stellar after all).

This episode is all about Owen – his ongoing conflict with Jack over whether or not he believes Jack really cares for him, his concerns about the meaning of his life and what he has become, and his desire to be a better man than he is. Unfortunately, most of this is retread from a much better episode: Combat. In the latter, Burn Gorman’s acting is top notch and he conveys all of the pathos and anguish that are required of his scenes, in the former he seems to be phoning it in. Since a lot of the themes are similar in this arch as they were in last season’s, Gorman’s lack luster performance is particularly apparent. Worse, Barrowman does a superb job in his scenes with Gorman making the stark contrast between Barrowman’s real pathos over the recurring themes of time, death, and living/loving and Gorman’s wooden reading of some powerful lines all the more evident. The interaction between them in the jail cell is further undermined by a ridiculous vomiting scene turned fart discussion that you’d expect from Beavis and Butthead not Torchwood.

There are serious logic gaps in this episode as well and they serve to remind that Martha’s character has been essentially a throw away since coming on the show. Freema, the Torchwood actors, and the Director have all worked hard to integrate her into the storylines but, and perhaps this is because she is a short timer, they don’t succeed in making her a necessary part of any of them. Dead Man Walking is the worst of the three episodes she is in in this regard. Martha is out of commission for most of the episode but her storyline in no way ties back to the 13 deaths (which it should since she was first attacked) nor to the operation of the glove itself (a slow drain on the reviver); the pathetic explanation of the latter “new glove, new rules” should disgust everyone including the person who penned it. When she leaves Torchwood, I fear I will find myself wondering why she was there at all . . . and that makes me incredibly sad as someone who has really enjoyed her character for both its historic and entertainment value. I’ve been asked not to tell you what happens with Martha and Rose in Dr. Who, besides it is off topic anyway.

There are also some incredibly awkward scenes with Toshiko in this episode. But when aren’t there with these two? Please writers, give the girl a real love interest and a chance to shine. She is a brilliant character and a wonderful actress. Episodes like Captain Jack Harkness in season one and Sleeper in season two really showed off her chops. I like that she is working through a lot of things like the other characters as evidenced by Greeks Bearing Gifts which has the same feel as Small Worlds or Out of Time but when it degenerates into patheticness, it demeans her and us.

I do like Owen’s final valiant effort in this episode when talking to Jack but found Jack’s response anti-climatic. I have to say that the energy and honesty that Gorman puts into those few lines reminds that he can do an outstanding job with Owen and makes me all the more frustrated that he hasn’t been. I know that Owen is supposed to be emotionally stunted because of childhood abuse (revealed in Adam) but Gorman himself said that Owen was given new life by killing Jack in season one and I’d like to see him use it. Being an increasingly closed off and arrogant character is not a new lease on life, nor does acting either of those emotions require a lack of commitment to any scene.

Zombie Owen sucks down electricity and runs amuck while Torchwood tries to follow. Ok that is only kinda true. There is another alien device and Owen is the only one who can get to it.

Owen reveals his true immaturity and lack of depth at the beginning of this episode which he already did in episode 7 really – he’s dead so he goes clubbing? In some ways, I guess his behavior is supposed to show us how disaffected he really was and who he would be if he could let loose . . . He is also painted as tragic which takes up the bulk of this episode, poor Owen talking to the suicidal girl about all of his woes . . .

This episode also has a lot of time spent between Owen and Toshiko where his true issues once again come to the surface. (And so do hers.) Please writers give the girl a backbone. 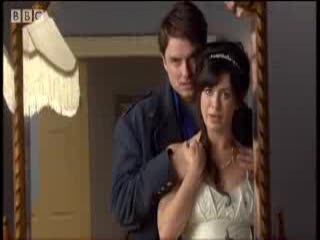 For Gwen fans, episode 9 is the one to watch. Something Borrowed is all about her and Rhys and love. It is nice the way they have been folding him into episodes lately. When Gwen goes and calls him in Dead Man Walking it shows the great level of acting and story writing that this shows offers precisely because it is such a normal thing to do, call your partner when you lose someone at work, and yet is done so well. I really think the vast majority have brought their “A game” this season. (For those of you bent and determined to put one love affair over the other in the whole Jack bi-sexual love triangle; this will be the episode where you can do a happy dance. I will only say this: sexuality is fluid, love is hard to quantify and I wonder at trying to quantify it particularly in the direction of a heterosexual read, what is in this episode cannot be disputed, neither can how it ends. I suppose I could do a whole analytical rift here, and if I were teaching this I no doubt would open it for discussion, so instead I will leave the door open for comment makers to do it here.) Oh, and yes, there is more stupidness with Owen and Toshiko but relatively little this time; and Owen gets to shoot “Jack” yet again. Please oh please no more daddy complex ok.

Now seriously, that is all I am going to tell you Torchwood fans.

If you don’t watch the show Chibnall, Tregenna, and Hammoned authored episodes are ones not to be missed. They set the tone for the best episodes of last season and it is turning out the same for this one. In the states, Adam is the next episode and even if you have already seen it, it is so good you should watch it again.