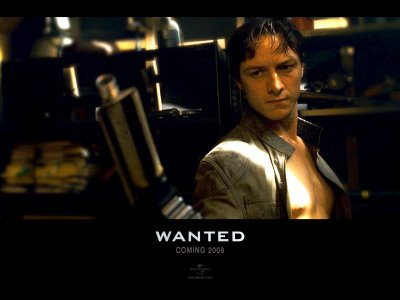 From time to time I go see movies I know will be awful because I am enamored with the people in them. James McAvoy is one such actor who,along with his wife, was one of the highlights of the show Shameless, made even the slowest scenes of the SCIFI channels rendition of the Dune trilogy shine, and enthralled me (despite not recognizing him) in Narnia even tho, having read the books, I knew what was going to happen. Even McAvoy’s roll in the Last King of Scotland, which made many angry because it so blatantly screamed that producers did not believe that a compelling film about a complex and increasingly unhinged African leader could sell to a white audience, was solid work. And his turn in BYT, Inside I’m Dancing, and more recently Atonement have gotten him critical acclaim on both sides of the pond. So even though I expected very little from this film clearly I expected too much from him.

Pre-teen boys with gun fetishes and a sadistic fascination with bloody meat (be it human or cow) will enjoy this film. If you go to the movies for mindless special effects, Wanted has a plenty and they are all good. And of course, you Jolie fans 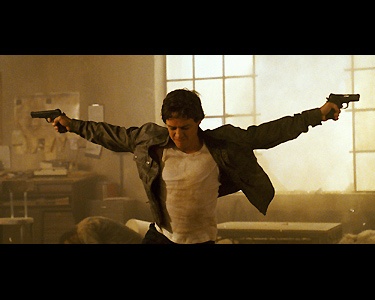 will be getting your usual eyeful of her ever svelt body. The rest of us, should plan a rousing day of cleaning the grout behind the toilet bowl for a better source of entertainment.

The loose plot is simple: a clerk turned super assassin by an elite agency supposedly doing the will of fate, goes after another super assassin to ensure the balance of the world. The special effects are spot on and the multiple car chase scenes are all well-crafted. All of the actors give credible performances, especially the small parts, and McAvoy’s action sequences reminded me of Dune in a way that made me smile deep inside. When the film gets to the main storyline it is actually enjoyable. Yet this is the first film in which McAvoy’s performance misses the mark and where there is no character worthy of emotional investment nor praise. Worse by the time they get to telling the actual story, you’ve already been bombarded with so much offensive and generally pointless shlock that you don’t care anymore. (Trust me, several people where I watched the movie, walked out long before it got good.)

The film begins with an offensive reference to Gibson’s (McAvoy) boss as an anorexic, while she hoovers cake scooped up on potato chips, and degenerates from there. For 15-30 minutes we are subjected to a bored, and boring, pity party voice 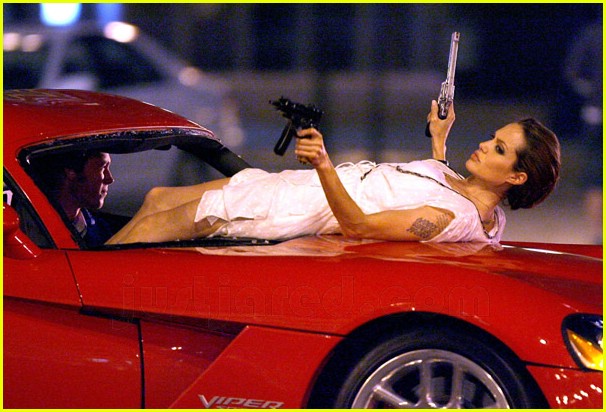 over by McAvoy as both he and the women around him are painted as losers. His supervisor, an obese red head in cartoonish clothes, endlessly harasses him with a stapler while inhaling doughnuts. Her obesity is an ongoing point of disgust and derision that reoccurs in both throw away shots and “moments of empowerment” for Gibson. Gibson’s nondescript blonde girlfriend, who looks like a junkie and spends 90% of her screen time in a dirty t-shirt and underwear, alternates between screeching at him and having dirty (as in soiled and unattractive) sex with his bestfriend. Later, while she is screeching at him, Jolie, whose name is Fox, will come in and lay down a tongue swap on Gibson that is only slightly less offensive than when Gibson looks up her skirt while she straddles him and shoots at “the bad guy.”

By the time Fox enters this movie, I already hate Gibson and wish he would die or at least that I would die so as to be spared the rest of the movie. No such luck.

Instead there is another 15-30 minutes of pointless violence. And by pointless, I wish I meant the multiple versions of

splattering heads and reverse bullet shots where the bullets go backward out of said splattering heads in slow motion so we can see the shooter’s angle that are overused in this film. For the perverse I’m sure such things are terribly entertaining . . . Instead, I am referring to the 15-30 minutes of McAvoy getting beaten bloody and then repaired for another round. His is tied to a chair and beaten then attacked by a knife wielding large man amidst hung up slabs of beef while called a “pussy” repeatedly for days. The “pussy” comment will be repeated over and over in these and another set of scenes later as we are invited to be outraged at the demasculinization it implies rather than its sexism. We will also be subject to both slabs of cow meat and dead bodies on hooks in the same place that is a weaving factory without explanation. The point? There is none. Unless you count the director’s desire to show blood spurting in every direction, get away with yet more misogyny, or are dumb enough to believe that this is the only way to get Gibson to realize he is there to find himself.

When the film actually gets to the story, 1 hr later, it isn’t that bad. At its heart it is an action film about a lost man trying to reconcile abandonment by his father, something to which McAvoy maybe particularly drawn. Once he becomes the famed assassin and the chase is on, it is actually worth watching. Unfortunately, the larger “plot” about guilt and power are executed poorly and delivered long after anyone still cares.

Worse, McAvoy’s considerable acting talent is nearly ruined when he uses it to kneel down and give a heartfelt reading of some of the most offensive dialogue (or monologue in this case) in the film. I never, ever, wanna see him down on his 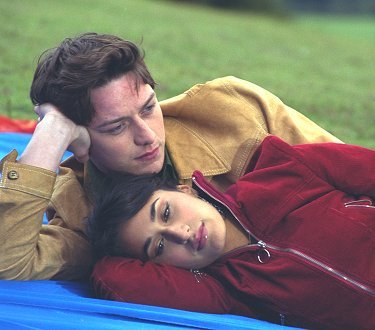 knees telling someone that if they were a good person they would be pathetic instead of vile just b/c their body does not match up with society’s ideals. It was unnecessary and purposefully derisive of a character who was already written specifically to be the object of scorn and revulsion. I have seen him flash that intensity in so many films and television shows, ones that were otherwise awful like Bollywood Queen,  and can only hope that what I love most in his acting style is not permanently marred by his willingness to participate in a throw away speech that can only make “high school worse” for girls. From someone who has shown sensitivity to his female costars and to women’s issues in interviews, he really dropped the ball by agreeing to do the scene in question. And I say this as one of the “pretty girls” who has been cruel in the past. (You are supposed to be one the good guys, who got into acting by being kind to an actor everyone in your school decided to be cruel to that day. Have you forgotten?)

To say this movie was bad would be a compliment. The theater was practically empty but almost everyone there was 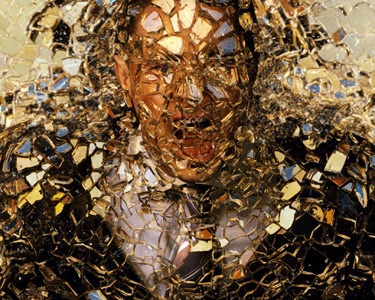 unhappy. Three families in the theater where I was watching walked out long before it was over. Two other women walked out for extended periods of time and when I asked one on the way out why, she said “well, I have a lot of stuff to do this weekend and I didn’t see any point in waiting to see if my dog could get into grooming early today. I was kind of hoping they’d say ‘bring him in now.'” The man behind me decided to sing along to the lyric-less soundtrack, another beside me began to text message his friend about weekend plans. When the film ended, people shuffled out in silence. A couple who parked next to us smiled in knowing sympathy and said “well, that was 2 hours we won’t get back;” I’m serious, they actually said that! If you don’t take my word for it, take all of theirs.

The one highlight in this film is Jolie’s endgame performance. In a film riddled with misogyny, it is her character that reminds us what heroism is both in her story about her past and in her last actions. Unfortunately, her final decision is marred by a lack of credibility that made my movie companion wonder if she should have done anything based on the source.

2 thoughts on “Wanted: The Return of the Summer of Men (one spoiler)”