Just got back from Wall-E. This movie is so sweet almost everyone in the audience cried out when they thought the roach (Wall-E’s bestfriend) was dead, and people who live in roach territory know there is nothing cute about roaches. 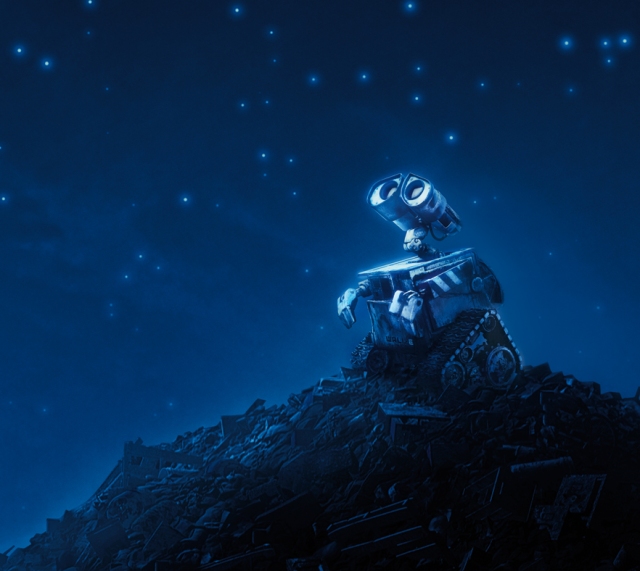 This movie’s premise is a little bit over the top in its execution but not in its point which is simply that the more consumption driven society is the less sustainable our lives will become. The film is replete with other movie references from R2D2 to #5 (short circuit) to Hal (2001), and yes Ripley (Alien/s),and a little E.T. and Terminator too. Though there are no queer people in the imagined future, there are tons of people of color and a robot revolution to boot.

The real story is the amazing resilience and character of little Wall-E and his love story with fellow robot Eve (ee-va). It is

the most adorable relationship I have seen since Drew Barrymore and E.T. Though Eve is more sophisticated and advanced than Wall-E, they are clearly equals in the plot, dependent on each other to ultimately resolve the storyline and keep each other hopeful and on point. His endless innovations to keep up with his work and with her, when all the other trash compactor robots died, is also one of the subtler ways the film brings home the point of recycling. A point which Eve learns from watching him and ultimately uses to save him. I also love that Eve is more than an object of desire.  As she says throughout the film “prime directive” comes first.  She has a mission and she carries it out even leaving Wall-E behind while robot police are looking for them to make sure it happens.  It is a symbiotic story that allows both characters’ strength, intelligence, and goals to shine. And their love affair is set to Hello Dolly, one of my favorite Babs

musicals, a nice subtle comment on class that is otherwise missing in this film.

The messages about kindness and perseverance are particularly strong. Little Wall-E makes friends wherever he goes by simply taking the time out to wave, introduce himself, and help others. As he does so, the people and robots around him start to follow suit. For the humans, that means forming relationships, discovering forgotten abilities, and displaying heroism in both small and large ways. Ultimately it is learned kindness that saves all of them. Several key moments in the film simply show that “each one does their part” and then we can all survive and thrive.

The only part of the film I would criticize was how trigger happy Eve is, including a multiple boat blow up. I like to think

that this was a reference to all the violence in summer movies and how pointless it is, but I know that is wishful thinking. There really is no point to her being fitted with a gun and I wish she had not been. I don’t subscribe to the a woman with a gun dismantles gendered stereotypes of weakness/needing protection school of feminism; think it through and you should get why.

The theater was packed. People were audibly invested in the humans and the machines. And no one got up until they were sure the credits were done, even the littlest kids. In fact, no child made a sound during this movie, accept in the “ahh moments,” they were so enthralled. Even the talkers (you know those people who come in on the phone, text through the film with spoilers, and blab to their friends through the whole thing) were quiet except for the communal cries, laughs, and cheers. You know when an audience giggles appreciatively at a roach popping out of a twinkie that Pixar’s film has worked miracles.

After all the shlock I’ve sat through this summer, this film was a blessing.

PS. This film has apparently been criticized for being anti-fat. While parents should definitely go to this film prepared to point out the subtle critique to their children, I think it is important to draw a distinction between critique and insult. Wall-E’s large characters are a critique of our society, most large characters in film and television (especially in Wanted) are malignant insults. While the humans in the film are all overweight sipping their food through straws, the film places the onus not on “lazy humans” but on cultivated consumption and service (robot) dependence. All of the human characters in Wall-E are decent, caring, people who actively work toward change in this film once the link to product induced over consumption is severed. They have romances, leadership positions, and are heroes by film’s end, all characteristics denied larger people in the media daily. Pixar is also so meticulous that it provides both medical and social regions for the humans’ obesity, something they did not have to do to get their point across but b/c they wanted to be sure we got that fat was not the issue.

The characters in Wall-E are not slovenly and desperate for ever increasing portions of food like Fat Bastard from Austin Powers or unbearably obnoxious like the boss in Wanted; there is no character faulting large people for “stuffing their faces” and implying they are willfully ignorant and unwilling to change like the first episode of Dr. Who this season. In keeping with the film’s main critique, these are people who have let corporations lull them into a consumption driven haze that first pollutes the planet beyond habitability and then pollutes the mind and the body. The overscale trash compacting robots in the hull of the ship also point to how a failure to change even after 700 years of evacuation means that they are now polluting the universe. And less we think they are lazy, the film includes a moment when two characters falling in love discover the swimming pool and are promptly sanctioned for using it by a corporate owned robot who knows the water is a threat to his (not human’s) existence.

The villain is not the overweight characters but the corporation whose consumption driven emblems dot the earth, the ship, and even the moon.

14 thoughts on “A Quickie: Wall-E (Some Spoilers)”