This past week, I finally sat down to review Kortney Ryan Ziegler’s new documentary Still Black: A Portrait of Black

Transmen and Harjant Gill’s Milind Soman Made Me Gay. Both Documentaries take the viewer through a series of men of color in the U.S. talking about the meaning of their prospective identities for themselves and within the context of family, communities, and nation(s). By shifting the GLBTQ gaze from its racial normativity, both in terms of the centrality given the white experience and the ways in which the normative gaze often falls on black and East Asian bodies, both documentaries also provide the opportunity for expanded discussion of what queer means and who is queer.

Both documentaries also provide academics with another venue through which to complicate queerness,

race, and gender in queer, women, and ethnic studies classrooms. Milind Soman Made Me Gay’s run time of 28 minutes makes it short enough to view in a single course session while Still Black would be best shown outside of class or over two sessions.

For both academic and non-academic viewer alike, these documentaries also provide a rare first person account of the meaning of identity and desire from the qoc perspective and remind us, as one speaker in Ziegler’s film says, to “live and love boldly.” 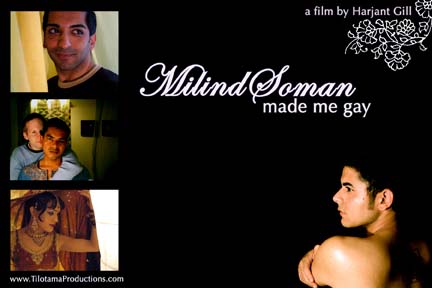 Milind Soman Made Me Gay (watch it here).

This experimental documentary takes it title from a controversial ruling against then model turned Bollywood actor, Milind Soman, who was found guilty of obscenity for appearing nude in a tennis shoe advertisement. The ruling was based on a longstanding colonial law that also bans same sex desire. The point of both title and film are to discuss and

explore the intersections of desire, art, and personal identity through the eyes of four Indian immigrants to the United States. The film includes the perspectives of a Hindu, Muslim, Christian, and Sikh, some whose identities were always present and others who came to them after hard battles to fit into traditional heteropatriarchal roles. What is most fascinating about their stories is the complex relationship between art, mobility, and identity. Unlike many documentaries of queer migrants Gill staunchly avoids the backward-modern dichotomy that paints the U.S. as somehow devoid of homophobia and also critically engages racism without veering from his initial point of what it means for him and his three co-stars to be gay in the liminal space of cultural inbetweenity.

From off camera, Gill tells us his own story of coming to America to escape violence against the Sikh’s that nearly got his entire family killed:

In India intimacy between men is quite common, but I realized then it was much different for me. . . Contrary to what I imagined, what followed were some of the most painful moments of my life.

While images of India and the U.S. flash across the screen, Gill discusses feeling isolated from his own community and the anxiety of returning “home” after so many years abroad. He juxtaposes the sense of safety he found in the eyes of a fellow queer traveler, a white American and the only person who would acknowledge him in the airport, with the violence

against East Indians in the post 9/11 aftermath. His stories and the connections he makes between global and local oppressions are striking. Ultimately, Gill tells us that both India and the U.S. have changed since his childhood days dreaming of Milind Soman and later running from N. American homophobes in the school yard. Despite a narrative of juxtaposition and immigrant anxiety, there is also a sense of peace of purpose in his final words, an understanding that he fits inside his skin and with one foot on each shore.

A second participant also discusses connections and disconnections with white N. America as part of his process. He talks about the difficulties of being seen as or expected to be “representative” of all of India in the eyes of community members and partners. He contrasts this with his own parent’s reaction to his white boyfriend and the strain the dual “disappointments” of being queer and dating outside of his ethnoreligious background has placed on him and his family. While his story highlights complexity it is the most jarring of the four b/c it is the only one in which another person appears. As the participant tells his story, his white partner stands first in the background and then increasingly in the foreground. One cannot miss his facial expressions at times underlining and others
undermining the chosen narrative of Gill’s participant.

Where Gill found the voice for his desires in the print ads of India and the coming out stories of N. America, his participants found them in dance and film.

“Dance became the place where love was confirmed”

As one of Gill’s participants explains, dance provided the vehicle for him to explore both gender and sexuality in a non-judgmental space. Since dance performances included male dancers playing the parts of opposite, same, and multi-

gendered characters and moving the body with a fluidity that would otherwise be questioned, he was able to come into his particular form of masculinity and desire through watching and then participating in dance. Dance became the vehicle in which he fashioned a queer self to boldly embody in the world.

Coming out was not as simple for another participant who recalls his “fascinat[ion] with adornment and dance” as early as age 5. His stories of a childhood being sanctioned by his mother for playing with her dolls and encouraged by his aunts for dancing like a courtesan lay the groundwork for the internalized struggle that leads him to marry and live with a woman for 10 years before finally claiming his voice and safe/whole place in the world. As he says about the courtesans, like him, they were “seeking acceptance” and someone to see their internal beauty. Instead, they found none. This heartbreaking comparison of social isolation and self doubt contrasts not only with other stories in the documentary but, thankfully, with this participant’s conclusion. He says he finally found “true intimacy and contenment” when kissed by a man 9.5 years into his 10 year marriage. Though there is still shame in his voice about the loss of his marriage, he too gives the viewer hope that it is never too late to “love boldly.”