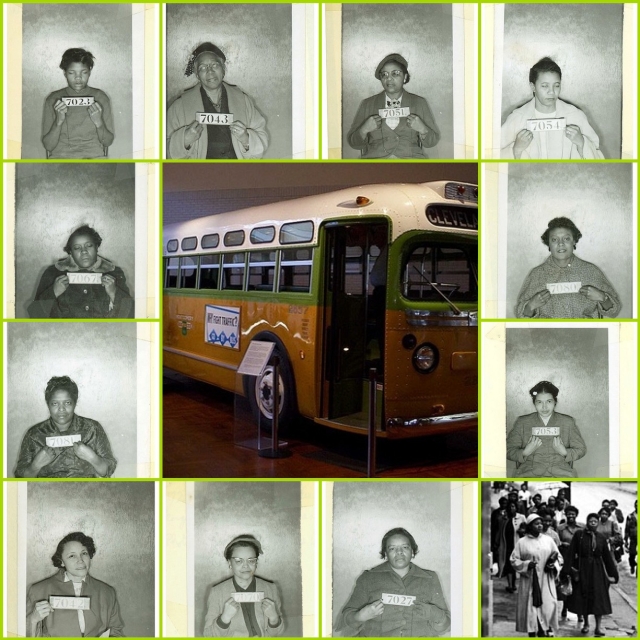 Often when we think about the Bus Boycotts and the start of the civil rights movement, we think of Rosa Parks and Martin Luther King Jr. The importance of these iconic figures cannot be underestimated. At the same time, the emphasis on extraordinary figures rather than extraordinary acts in the face of ordinary discrimination, mask the wide body of individuals who help make a movement. And as I have argued in a previous post, this masking of ordinary folk for extraordinary ones, often done on gender lines. Thus while we do canonize Rosa Parks, the civil rights movement and the bus boycott are often re/membered as male.

The reality is that the bus boycotts could not have been successful without the participation of black women. At the very basic level, it was black women who had to ride the bus on the long trips to and from their own neighborhoods to those of the white people’s homes in which many of them worked. While black men also rode the bus, the majority of riders were women; meaning, if women did not boycott the bus protest would not have succeeded. At the same time, when the protests occurred, we cannot forget that black men provided needed escort and rides to women as part of the effort and that sympathetic white people also provided rides in solidarity. These actions illustrate how solidarity across identities is essential to ensuring the equality of both people of color and women. And in a world that has increasingly failed to mobilize successful boycotts or support needed boycotts and girlcotts, the most recent being the disdain showered on the gay community for calling for boycotts of businesses that supported prop 8 or some white feminists decision to stand in solidarity with Seal Press against the women of color they called “haters” and said spoke “best in conflict” and admitted to publishing less in the past few years b/c they were “focused on sexuality” as if women of color have none, I think the example of the busboycott and the women who made it happen is a critical one.

“I called two or three people, and I stood right there for several hours because I was just so happy not to see anybody on it. It’s a feeling of such happiness and accomplishment that you just can’t quite explain.” – Thelma Glass, member of the Women’s Political Counsel (Montgomery Advertiser)

Mary Fair Burks, an academic and activist who would later give up her teaching position in solidarity with several black faculty who were fired for civil rights activism, founded the Women’s Political Counsel in 1946 in Montgomery Alabama. Its founding was the direct result of the intersection of race and gender; that same year, Burks had been arrested in a traffic incident in which she was arrested for defending herself against the white woman who had caused it. The male police officer struck Burks in the face and aggressively dragged her to the police car before arresting her. Burks felt that unequal treatment under the law had gone unchecked in Alabama far too long. More than that, she wanted to ensure that African American women, who had no legal access to “womanhood” and “innocence,” knew their rights and were able to advocate for themselves.

Burks had long challenged segregation on her own referring to transgressions against “whites only” bathrooms, elevators, and fountains as “my own private guerrilla warfare.” (Burks 1990) Thus she used her own experiences to help empower other women to know how to challenge the system successfully.

The WPC focused on three areas of empowerment:

In its first 4 years, the WPC grew from 40 women to over 300. As part of their commitment to political equality, all of their members were registered to vote. They also appointed a group of women, including Thelma Glass, quoted above, to act as advocates at voter registration and the police station. Their job was to support, advocate, and report, so that discrimination no longer went on behind closed doors.

In 1950, Joan Gibson (Robinson), another academic, took over the organization and increased the focus on bus

segregation. Since many African American women were dependent on the transit system to make the long journery to and from work, the rule of making black people sit in the back 1/3 of the bus and exit when the first 2/3 were full and white people continued to board, was particularly taxing on them.  Worse, since they were seen as immanently violatable, being ejected from the bus outside of urban centers could prove particularly dangerous for them. Not only did they face long walks, or waits, but also the threat of assault.

In may of 1954, shortly after the outcome of Brown v The Board of Ed, Robinson wrote the mayor warning that if something was not done about segregation in Alabama the WPC would encourage a boycott of the bus system and other segregated services. 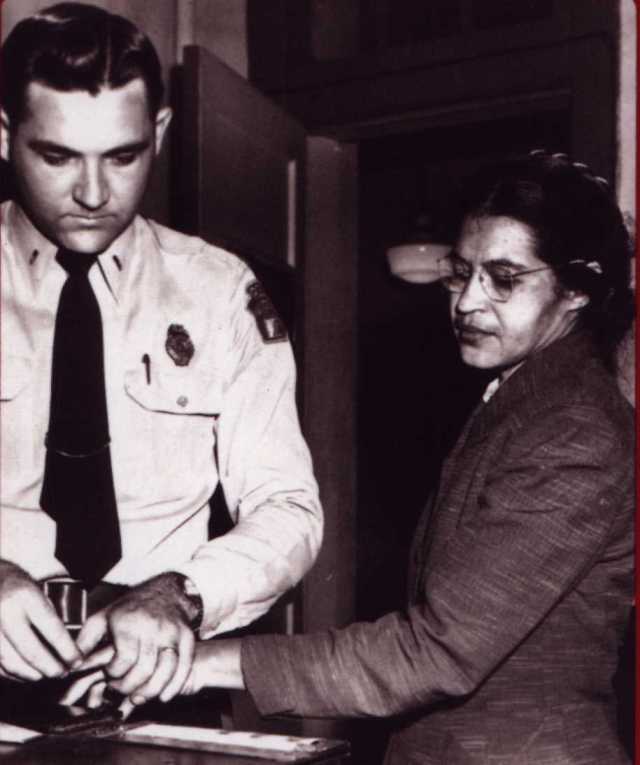 On December 1, 1955 the issue came to ahead, when NAACP secretary, Rosa Parks not only refused to give up her seat but also to move to the back of the bus. When confronted by police officers, Parks said she would rather be arrested than dehumanized. Her arrest was the spark the WPC and other civil rights advocates needed for the bus boycott. And in the days to come, she would give both eloquent and defiant speeches about the equality of black women and black people.

As well all know, Rosa Parks’actions would become a rallying cry for women and men in the civil rights movement and her image would symbolize the dual needs for equality amongst women, people of color, and women of color in particular. Her statement that she was tired and had worked hard all day and therefore should not have to move, also motivated people to discuss the treatment of care workers, women’s labor, and the space for solidarity between white women employers and their largely black female workforce. Discussions that continue to this day.

Several women began to challenge segregated bus policies by refusing to give up their seats. 18 year old Mary Louis Smith 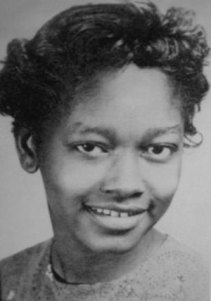 defied authorities and remained in her seat on a crowded Montgomery bus before 1955, ultimately being ejected by the bus driver and police. Claudette Colvin was only 15 years old when she refused to give up her seat in March of 1955. She was the first black woman/girl to be arrested that year for challenging the system. While both women gave testimony in the Browder vs. Gayle case that desegregated the buses, neither was chosen to be the face of the movement.

While the WPC has been instrumental in consciousness raising and advocacy for black women, it had not challenged traditional female roles nor class differences. For instance, Joan Gibson, always went by her married name Joan Robinson even though she had gotten divorced after becoming the head of the WPC. The membership of the WPC was decidedly middle class, married, and traditional.

Smith’s well known alcoholic father was seen as a distraction to the movement. The WPC worried that people would not rally around a girl whose father could be found drunk in the streets. Nor were they willing to embrace 15 year old Claudette who was known to be sexually active and unmarried. (Many histories erroneously report that Claudette was pregnant at the time of her bus arrest, but the birth of her first son was over 9 months after her arrest.) Interestingly, Claudette had been the test case as she was a member of the NAACP Youth Council and had been an active participant in discussions about bus segregation.

Colvin said her civil disobedience in 1955 came soon after studying her heritage in school and hearing teachers talk about the injustices against African Americans, including the Jim Crow laws. She was inspired and supported by two teachers. (Montgomery Advertiser)

Claudette’s books had been thrown off the bus first and then she was dragged off herself. After her arrest, rather than being embraced, she felt young people in her neighborhood distanced themselves from her as “a troublemaker.” Yet her own faith in the cause kept her from wavering and she is largely credited by scholars as a key figure even though history and museums have largely erased her efforts.

Between Dec. 1 and Dec. 5, 1955 the WPC mobilized a massive effort to raise awareness about the impending Boycott. All 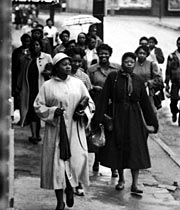 of their members were sent out to leaflet neighborhoods, businesses, and churches. They activated a massive phone tree not only to get the word out but also to organize alternative transportation and walking groups (groups of women on their own and/or flanked by men to get to work). Thelma Glass describes her own car as its own bus service, as she and other members of the WPC shuttled everyone they knew in groups to and from work for the entire year.

The result was that the buses were completely empty on Dec. 5 and that they continued to remain that way throughout the year.

The WPC and the women’s wing of the NAACP also took on the bulk of the care work necessary to support bus boycotters turned full fledged civil rights activists. They provided food, clothing, and shelter to families who lost their jobs or primary breadwinners in their families as a result of civil rights activity and police brutality. They also provided childcare for women and men attending civil rights meetings. Some also helped provide traige medical care, based on knowledge and supplies gained as nurses, and in transporting wounded activists to friendly hospitals. Their care work, though gendered, was invaluable to the survival of the movement. 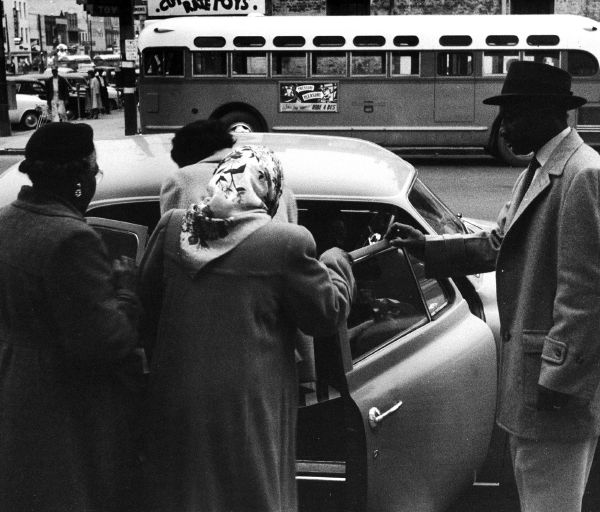 The WPC’s efforts were also instrumental in getting people to come out to the midday church meeting held during Dec. 5, 1955. That meeting is largely credited as the first meeting of the modern civil rights movement. On that day, they elected Martin Luther King Jr. to head the new Montgomery Improvement Association which would began by challenging the buses.

In recognition of the WPC’s instrumental contribution, Robinson was voted onto the exec board. She also became the editor of the MIA paper, the source for much of the early information on the civil rights struggle in Alabama.

The Battle with the Law

Several women were arrested as part of the boycott efforts including those pictured in the mosaic at the beginning of this post: Everetta Adair, Addie Hamerter, Alberta James, Jo Ann Robinson, Irene A.W. West Sr., Cora McHaney, Mentha Johnson, Ida Mae Caldwell, Audrey Belle Langford, and Lottie Green Varner. The entire membership of the MIA was also arrested later that year in the hopes of busting the boycott, among the women arrested were Robinson, Parks, and West. Rather than hampering the movement, these arrests galvanized neighboring towns and cities and lit the spark of civil rights across the nation.

In 1960 both Burks and Robinson were investigated for their civil rights activities by an organization that gave heavily to the university where they taught. While Burks resigned, writing to Dr. King about the future of her employment, Robinson was fired. Both women went on to work in other universities outside of Alabama but their loss to the state was immeasurable.

Both women continued to be active advocates for women’s rights, education reform and equity, and civil rights until they died.