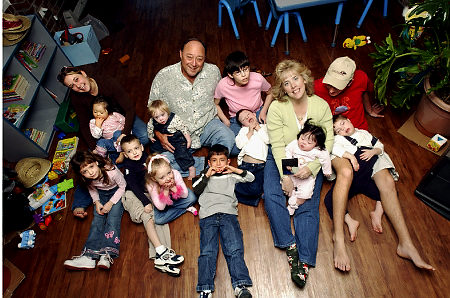 When I first read about the murder of Mr and Mrs Billings infront of some of their differently-abled children, my first thought was to grieve for the children left behind. Then as footage of the well-orchestrated midday theft hit the airways, I began to question what would motivate such a well-honed team to attack the family home in the middle of the day. The police press conference yesterday focused in on the family grief and provided the key information about the suspected murderers: they were a multicultural group of day laborers, one of whom had done work in the home and knew the layout and the routine of the family. While much of the internet conversation has focused on either class or family narratives, I keep wondering why there has not been more discussion of the link between ableism and the daylight assault. The evidence of the case clearly shows an organized attack with an overwhelming use of man power and entrance in the front and back of the home that would prevent escape. So I can’t help but think they knew those children would be home. They knew that either parents or caregivers would have to be home if the children were also home. And they blocked the main entrances and exits to the home, meaning that both the children and the adults would be trapped inside. Most crime, particular by organized theives, is committed when they know no one is home and cannot identify them. When the target is a safe, as it was in this case, people usually show up, crack it and get out before they are seen. So I can’t help but think that these thieves assumed that differently-abled children would pose no threat to them.  And since none of the children were harmed in the attack, it also seems to argue that the theives had not planned to hurt them which would of course require them to assume they were not capable of comprehending either the criminal activity in their home nor the murder of their parents. Put another way, the dehumanization of differently-abled children in the home (ableism) allowed them to plot at robbery that was gauranteed to lead to murder and traumatization of child witnesses. Had those children been thought of as “equal”, for lack of a better word, the sheer number of children living in the home would have made attacking the home seem too risky. And so to me, it seems that ableism is a key component of this crime. This ableism is significant in this specific case b/c it cost all of these children their family and their home, but also in a larger narrative of criminality. Remember all of the crimes against differently-abled young women of color last year? All of them were targeted partially because of their abilities and the outrage about their extensive abuse seemed to be mediate by their color and their abilities as they garnered far less attention in the media than able-bodied white female victims of crime. And so I find myself wondering what would happen if we started to interogate the narrative of able-bodiedness at the intersection of crime. Would we find that there is an ongoing targeting of differently-abled people that goes unmarked and under reported or that these cases stand out b/c of their sensational aspects? (Obviously, I think the former is likely true and that their is evidence of it amongst advocates, especially in health care circles.) And if/when we document those patterns how could we use that to better address the abuses of marginalization and the potential to shift narratives about differently-abled people in our society to combat marginalization?