On walking out of the theater, my companion turned to me and said “I’m not sure if I’m just over the Potter thing or what, but that was really boring.”

(all images property of Warner Bros Studios. Harry Potter and Half Blood Prince. 2009)

While I won’t say the film was boring, I will say that I think the studio waited too long to release it and that might contribute to some being bored with its 2.5 hour run time. Part of the problem is that the cinematic version of Harry Potter and the Half-Blood Prince seems far more dependent on the audience being familiar with the previous film and the books than other films in the franchise; yet, it is the one with the longest lag time between release dates.

The other major issue with this installment is that it tries to cover quite a bit of the novel without really covering the things that are most important to the plot. Thus the first part of the film lingers on a series of vignettes. These vignettes focus on the funny rather than the dark aspects of the story. While entertaining, they spend far too much time mired in the heterosexual hormonal goings on at the school or in unexplained moments that will only make sense if you read the book. They are also disjointed, ie unconnected to one another in a way that will make it hard for some to get into the film.

The actors have all gotten much older and are beginning to pair off in this edition. And while they have a new teacher and new classes to master, their minds, and the film’s focus is decidedly on who is dating whom. Instead of telling us more about how Voldemort became the Dark Lord or addressing the growing disillusionment and descention of his followers, much of Half-Blood Prince‘s runtime is taken up with the insipid behavior of Ron’s new girlfriend and Harry and Jenny’s dancing around one another as her relationship with her black boyfriend unravels in the background.  One particularly disturbing scene in this vein, has Hermoine killing 5 small birds in a fit about Ron dating someone else. Another has Jenny bending down to tie Harry’s shoes while looking starry-eyed up at him. (One child in the audience, kept asking who the half-blood prince was, and then when it was revealed, kept saying that Snipe was not real b/c he was the half-blood prince; if that isn’t proof they did not spend enough time on plot, I don’t know what is.)

Hormones are also the lens through which the tiny issues surrounding race arise. Potter flirts with a black waitress at the

beginning of the film seemingly endorsing a multiculturalism that is lost in the last film before this one despite Potter’s interracial relationship in the book it was based on. But she is so insignificant that Dumbledore doesn’t even allow Harry to say goodbye to her or explain why he has skipped out on their date; Harry himself shows remorse over this but it is quickly undermined by his drooling over Jenny that same day. As for Jenny’s boyfriend, he is only there to snog her in front of Ron, the film all about their hormones never once shows the couple’s relationship as three-dimensional, nor explains how she so quickly shifts to Harry while still dating him. (Except for a late arrival at a party where Hermione says they must be fighting again.) The only other people of color in the movie, are a black girl whose hair goes from straight to “frizz” at the joke shop and a Latina girl who is tortured first by a curse and then a poison meant for Dumbledore. Neither of them are meant to be real characters in the film but like Luna are reduced to background. And honestly, all of the characters of color are so fleeting in this film as to be completely forgotten by most

audiences. They are also tempered, in my mind, by the presence of the Weasleys who are so clearly a stereotypical depiction of the Irish and the fact that they have become increasingly less stereotypical in the films as the franchise moves forward.

Hormones are also the lens through which female characters are reduced to insipid and violent acts in this film. To the story’s credit, Ron is also reduced to stupidity by a love spell and the boy in love with Hermoine is as big of an annoying stereotype of self-aggrandizing masculinity as Ron’s girlfriend is of female drooling run amuck. I do remain concerned by how the series seems to subvert female intelligence at puberty and how the last few movies in particular have wasted female characters in order to champion the central male narrative. Some of the women in the book have been completely sacrificed in editing and others relegate to the background or insane cackling. (And yet, at least they appear in both versions while discussions of class are utterly lost – the handling of Neville Longbottom in this movie is atrocious and the handling of both him and Snape in the last one was equally so.) Finally, Half-Blood Prince continues the vein of championing male cheating (this time Potter wins praise by cheating with a book

of spells instead of Hermoine and his teachers helping him cheat) over female hardwork. Not only does this happen again between the disproportionate praise to Harry vs. Hermoine, but also with Ron who wins his spot on the team b/c Hermoine cheats for him (unbeknownst to Ron). And even when Ron wins on his own, he thinks that he is cheating. This scene is telling b/c Harry himself points out how much cheating they all do to help Harry but only to justify more cheating. Women’s intelligence does however get some play in this film. They are included in the circle of smart students with the boys. There are also some subtle subversions: Jenny is stronger than Harry when it comes time to hiding the book of spells and while several of the boys disappoint at dinner, Hermoine and Jenny do not. Perhaps most telling is Hermoine’s admonishment of Harry when he says he is going off on his own to finish Dumbledore’s work. “You need us” she says, and that is something I have always been concerned has not been prominent enough until the very end of the series.

One of the key events in the movie also had me thinking of Lord of the Rings from the minute they entered the cave. I literally started whispering “my precious” under my breath as the emaciated bodies emerged from beneath the water’s 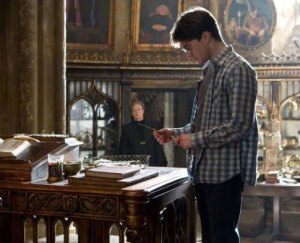 surface. There is never a bigger Gandolf rip off than when beloved Dumbledore takes them out. Since this is one of the key magical scenes in the film, the rest are mostly uneventful wand flicks, it is going to be disappointing to fans of LOR. Nevertheless, the graphics are nice. (The other big scene is when Harry almost kills Malfoy and when they set fire to Hagrid’s home, the significance of both of these events is poorly executed in this film, but to provide tension and nice graphics.)

For the most part, Harry Potter and the Half Blood Prince is an entertaining film with very little offense. Both the gender and race issues are minor in a movie that is always centered on its male warlocks and their moral questions. In not being choosier about what was included and what was not, the film fails to gives us much needed insight into Voldemort youth or the rise of the death dealers and that was unfortunate. In comparison to other Potter films, and certainly to the book, Half-Blood Prince was not the best in the franchise. And while I generally think you should watch the films in their own right and read the books on their own, this time I really think you should read the book. Never the less, in comparison to other films out this summer, Harry Potter and the Half Blood Prince is far less offensive and about as equally entertaining, if not better, than most of what you have to choose from.

For the younger viewers, I can only say that the children in front of me were thoroughly confused by all the scene jumps. They asked questions everytime the scenes switched. Young ones who had not read the books were also confused by key plot points and were constantly asking for clarification. The older kids, who had clearly read the books, however seemed completely engaged tho none of them walked out talking excitedly about the film the way that they have in all of the other films.