Watching day two of the Sotomayor confirmation hearings, I could not help but be struck by two things: how racism is so pervasive in our government and how truly gifted Sotomayor is at handling offensive behavior. 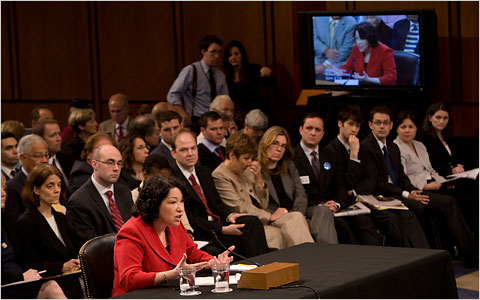 While Republicans have consistently misquoted Sotomayor’s “wise Latina” statement in the hopes of placing her at the center of a reverse-racism complaint, their questions during the second day of confirmations did more to confirm racism than any of their accusations ever could. Sadly for them, that confirmation was not about Sotomayor, but about the Republican interlocutors (Sessions and Graham) she handled so gracefully.

During the course of the day, she was asked why she did not side with another Puerto Rican judge in the firefighter case:

You voted not to reconsider the prior case. You voted to stay with the decision of the circuit. And in fact your vote was the key vote. Had you voted with Judge Cabranes, himself of Puerto Rican ancestry, had you voted with him, you could’ve changed that case.

The question, which was meant to imply that Sotomayor’s vote was the deciding one, instead highlighted the racial essentialism of Senator Jeff Sessions. He seemed to be implying that the only reason that she and another Puerto Rican American would disagree with one another on the decision was her supposed reverse racism against white men; an argument that hinges on the idea that all brown people think alike.

(It should also be noted, that had anyone person who voted against the firemen changed their vote, they would have won. So the idea that Sotomayor cast the deciding vote is as ridiculous as implying that having voted differently than a fellow Puerto Rican American proves she was biased.)

While Senator Sessions comments are making the media rounds, I think he is an easy target. It is common knowledge that Sessions himself was turned down for the Supreme Court several years ago and that many cited his racial politics for that decision.

Senator Graham, on the other hand, has no similar history and yet his comments on the second day were equally if not more offensive than his colleague. In addressing the “wise Latina” comment, Graham repeatedly cast himself as the victim of “reverse discrimination” in a lengthy exchange with Sotomayor about her statement:

do you understand, ma’am, that if I had said anything like that, and my reasoning was that I’m trying to inspire somebody, they would have had my head? Do you understand that?

I just hope you’ll appreciate the world in which we live in, that you can say those things meaning to inspire somebody and still have a chance to get on the Supreme Court. Others could not remotely come close to that statement and survive.

In both of these instances, Senator Graham seems to miss not only the point of Sotomayor’s statement (which is that our experiences shape us) but also the history and meaning of racial power in the United States. His assertion that had he said he was better qualified than a person of color not only misrepresents the meaning of Sotomayor’s statement but also is profoundly ironic coming from a Senator from one of the states who fought the longest and the hardest against freeing slaves and affirmative action. Many people in SC have said the very thing Senator Graham claims they would never get away with and actively worked against civil rights in Congress based on those believes. More importantly, not only have some white people across the nation argued in public that they are better qualified to run government than people of color, most have not come under fire for it for the majority of this nation’s history. It is common knowledge that former members of white supremacist organizations and those who spoke at their meetings have sat in Congress well into the present and that people, like Senator Sessions, who have been publicly accused of racism retain positions at one of the highest levels of our government without incident. In fact, a former member of the Klan was nominated and appointed to the Supreme Court with what initially started out as minor opposition; Hugo Black’s defense has always been that his time in the Klan was tempered by trying to stress non-violent solutions to “the race problem” and that his activities were largely disregarded and membership denounced by the Klan themselves. The link between white supremacy and government includes every branch of our government at one or more points in our history. Moreover, Senator Graham’s belief that he personally is a victim of double standard ignores the fact that he sits in one of the three highest branches of our government making policies about our nation while claiming that a Latina woman has no right to serve on another such branch until she admits that her comments about how race and gender shape our experiences and make us more able to recognize issues that people with different experiences may not be able to is akin to white men saying they are better leaders than people of color.

This exchange was followed by a lengthy discussion of 9/11 and military law which is generally handled by military courts. The ultimate goal of this exchange appeared to be to remind the audience that Senator Graham himself was a lawyer and that he was somehow more intelligent about the law than Sotomayor. He seemed to be asking her to admit that he was smarter than she on issues neither of them have actually contended with, and more importantly that he seemed no better prepared to handle than she. (you can read the transcript here)

His condescension extended to typical tone arguments that most people of color have had to contend with at one point or another in their careers:

If I may interject, Judge, they find you difficult and challenging, more than your colleagues. . . . And I never liked appearing before a judge that I thought was a bully. It’s hard enough being a lawyer, having your client there to begin with, without the judge just beating you up for no good reason. Do you think you have a temperament problem?

When she answers in the negative, after having already explained the way the court works, Graham repeats himself for the third time, claiming he is “only trying to help”:

. . . I would just suggest to you, for what it’s worth, Judge, as you go forward here, that these statements about you are striking. They’re not about your colleagues. You know, the 10-minute rule applies to everybody. And that, you know, obviously, you’ve accomplished a lot in your life, but maybe these hearings are a time for self-reflection.

What makes his insistence on entering this material into the record questionable is the unfair weight he places on it over positive reports, and its seeming reference to a single newspaper article and anonymous sources. No one has gone on record agreeing with the anonymous comment makers. On the other hand, several people have gone on record alleging the exact opposite, ie that they Like Sotomayor and have had a good working relationship with her. Thus it seems that the sole purpose of citing this article was to give Sotomayor a dressing down. Like his comments aboutr reverse discrimination that he concluded by saying he hoped she had learned something about how to speak in public, these comments about her “learning curve” implied that somehow a woman of color who had come from poverty to become a Republican appointed Federal Court Judge has no public decorum and needs a man to explain it to her.

The conflation of sexism and racism in his line of questioning continued into his questions about reproductive rights and the Puerto Rican Defense Fund. Not only did he try to make the case that reproductive rights are not constitutionally protected, which in the narrow “Is there anything in the Constitution that says a state legislator or the Congress cannot regulate abortion or the definition of life in the first trimester?” that Graham is applying, as opposed to the 14th ammendment everyone else uses, obviously not, but tries to pit gender against race. Thus Graham’s entire line of questioning about reproductive choice includes a repetitive reference to the fund’s assertion that denying a women “an abortion is a form of slavery.”

He seems to want both Sotomayor and his peers at the hearing to balk at the oppression of women in an oppression olympics game that undermines his previous racial arguments. Moreover he fails to understand both the longstanding tradition of mainstream feminism to compare women’s oppression to slavery in both print and speeches (a rhetorical tradition that does raise concerns for many but was original adopted in order to highlight for ppl who might not see women’s status as unequal the ways in which it was similar to other recognized oppressed groups) and the fact that the women whose rights were being defended in those statements were women of color who cannot separate race from gender in their daily lives. Puerto Rican women in particular needed federal protections because of the longstanding history of interference in their reproductive rights include a George W. Bush authored bill to forcibly sterilize them based on the very idea that they were less deserving of human rights that underpinned slavery in this nation.

Ultimately, it is unclear what the Republians were hoping to accomplish in the second day of the hearings. As someone who has been weighing Sotomayor’s nomination not against the historic identity politics of the situation but rather the judicial implications of it, I have to say that the hearings are making more and more inclined to be grateful for her nomination. The very fact of her brown femaleness in the Senate has exposed the underbelly of racism and false sense of victimization that many still hold in the highest branches of our government. Her ability to navigate this bigotry with mostly calm and well thought out response thoroughly grounded in case law and knowledge of the constitution is a testament to the kind of colleague that she will be in the Supreme Court and the way she will make her decisions about cases sent there. While I remain unclear on her positions on some key issues, her ability to expose racism and navigate it while always keeping her eyes on the law is profoundly impressive. Rather than Sotomayor taking a lesson from Graham, I think perhaps Graham, and many others in this nation, could take a lesson from her.