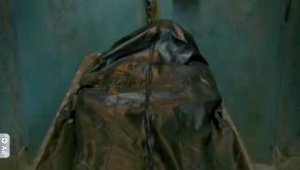 The second episode of Torchwood Children of Earth is defined by the strength of female characters. With Jack literally blow to bits and Ianto and Gwen on the run, this episodes focuses in on the woman hunting the Torchwood team and both Gwen and Louis’ attempts to stop the government conspiracy out to destroy Torchwood and hide the truth.

Gwen in particular shines as a well-trained bad-ss in this episode. She escapes the explosion only to have to fight her way out of a second assasination attempt by

men pretending to be fire and rescue. She then returns home long enough to make sure Rhys is safe, before taking off with him to regroup and save Jack. Her rescue attempt involves a powerhouse shoot out where Gwen is outnumbered and surrounded, and yet she marches into the military prison, guns blazing, only backing down when she can no longer fight.

Gwen receives help from Louis Habiba, who has become increasingly concerned about the conspiracy unfolding around her. When Gwen calls the Home Office for

help, Louis intercepts the call and meets Gwen to explain that it was actually her boss that ordered the hit on Captain Jack. She also comes up with the plan to rescue Jack by putting together pieces of overheard conversations in the Home Office and accessing maps needed to successful intercept a transport vehicle and navigate the containment facility. Louis outlines this plan for Gwen, complete with schematics, despite Gwen’s initial shortness about her showing up instead of Frobershire. Louis also pays for their food without complaint and commits to continuing to keep her eyes open back at the Home Office. Her role will expand even more in the next episode. (As expected, Gwen offers her a job 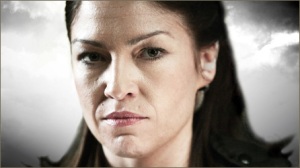 when this is all done; however, as we will see in the final episode, the Torchwood team’s treatment of Louis deteriorates inexplicably at the end.)

The woman heading the assault on Torchwood, Johnson, proves to be increasingly heartless. Not only has she tortured Jack (shooting him and blowing him up) and shot Rupesh in the back, she also relentlessly hunts down Gwen and continues to torture Jack when he miraculously survives the explosion. Despite being a crack tracker and shot, she does however manage to miss every member of the Torchwood team as they escape the military prison.

Two things mediate Johnson’s image as the stereotypical heartless witch: the presence of Dekker (an equally, and by series end more, vile character) and her role as a “true believer” who chooses the protection of humanity at every turn. She believes hunting down Jack and destroying Torchwood is protecting the Earth. When protecting Earth requires other choices, she makes them. In this way, she is a lot like Jack. And I think it is important to look at the gender differences in how the two are played, written, and received.

Other key things that occur in this episode: