Like many people in academe, the blogosphere, or simply interested in equality, I am keeping track of some of them more heinous examples of offensive-marginalizing thinking about the President of the U.S., the Obama Administration, and political figures in general. I am particularly interested in those images that combine racism and sexism or homophobia and what they tell us about the underlining anxieties of so-called “middle America.”

One of the common tropes in this vein has been “Obama as rapist” or misogynist, which rely on the myth of the black rapist. This discourse was most prevalent during the primaries and was mobilized by people on both the left and the right. In general, people on the Left tended to be more careful about the way they talked about Obama’s interactions with Clinton and their “suspicions” about his thoughts on women in general. Their assumptions about his seemingly-inherent misogyny and crafting of him as dismissive of domestic and sexual violence coupled with language used to describe his interactions with Clinton and other women was distinct from those who actively criticized specific policies or decisions Obama had actually been involved in. On the right, the black rapist image, ala Birth of a Nation, was much more common than any “subtle” attempts at link black political aspirations and white women’s safety. After Clinton was defeated, this discourse died down on the Left, but many of their tactics were then adopted/adapted by the Right to discuss Obama vs. Palin alongside the pre-existing racist paranoia about black male misogyny and sexualized violence. Now that he is President, political discourse has seemed to move on to much more nefarious and ubiquitous fears but the anti-Health Care protesters and anti-government protesters have continued to keep the threat alive with some of their signs and slogans.

I analyze many of the images in the slideshow below in the Anti-Obama Sign link at the top of the blog but wanted to give you some of the images here before launching into an a close reading of the latest racist-sexist cartoons from Darleen Click depicting Obama as rapist of N. America.  Because wordpress slideshow does not allow you to use more than one slideshow in a post, I am unable to just post the sexist posters here and keep the racist (sans sexism) posts until the end; pls note that the “black in white” image is actually a Russian ad and the Palin shoe ad was originally a completely different image used in England, all others come from the U.S. (it takes a while to load, but you can scroll down and read the post while waiting)

The latest entry comes from Darleen Click, a conservative blogger and photographer/cartoonist who currently writes at the arch-conservative blog Protein Wisdom. (Frighteningly, that blog is run by an academic who teaches somewhere in Colorado after a fairly prestigious education.) Last week, Click made one of the most blatant racist-sexist cartoons to date:

The image made the rounds of conservative blogs, who mostly praised it, with little attention from mainstream media. It replaces a particular woman, Clinton or Palin, with Lady Liberty in an attempt to capitalize on both racialized sexism and ongoing unfounded fears about the state of N. America. Like the older white woman who cried out “I want my America back” at a rally late last year, this image speaks to the idea many people seem to hold that by nature of his blackness, President Obama is anti-American. Harkening back to Birth of a Nation, the image also equates black leadership with sexual threat as a metaphor to socio-political threat, ie the insatiable black man will not only rape white women but his appetites and lack of restraint, ie civility, will ultimately bring down the nation. This is classic projection given the founding of this country and the examples of colonial and slave rape in the Americas that is an integral part of U.S. nation-building or Manifest Destiny. It is also ironic in the wake of an endless number of scandals involving Conservative representatives cheating on their wives, implicated in the disappearances of female staffers, and/or under investigation for sexual harassment of both male and female, of and under age, staffers at this time. And while Democrats are certainly not immune to these scandals (notably Clinton and Edwards) they do not belong to a party that links sexual morality with political aptitude. While President Obama has been the happy family man hard at work, many white male Neo-Cons in the government have compromised their effectiveness in Office or lost positions, like Governor, and one time Presidential hopeful, Mark Sanders precisely because they cannot keep it in their pants.

Sexual scandals aside, this image mobilizes the black rapist. Note how the bubble above Obama’s head references “consent.” In a single image, Click captures the fears of many conservatives (and more than a few bigoted liberals) about Obama sullying the nation through unbridled and wanton desires. In reality those desires include Health Care, Immigration Reform, Reproductive Rights (and Wrongs), and Mediated Gay Rights. Rather than addressing the issues, which would require moving beyond political pundits’ talking points and critically engaging information about the nation’s needs, women’s bodies have once again become the political proving ground. The “innocent white woman” sits shamed by the “scary rapist black man” because the conflation of sexism and racism are images that ultimately undergird the founding of this nation. At it’s heart, not only does this discourse rely on the obvious racism of black male licentiousness, misogyny, and violence but also on the equally heinous sexism of women as property (ie one wins or loses by sullying “another man’s woman”) and sexist racism of white women as virtuous (which allows white men to justify any number of violent acts including lynching, burning down whole towns, or driving out whole communities).

Some conservatives did criticize Click for going too far, as did some liberals. In response, Click made a second cartoon in which she removed the rape image while still calling it up in her cartoon title: 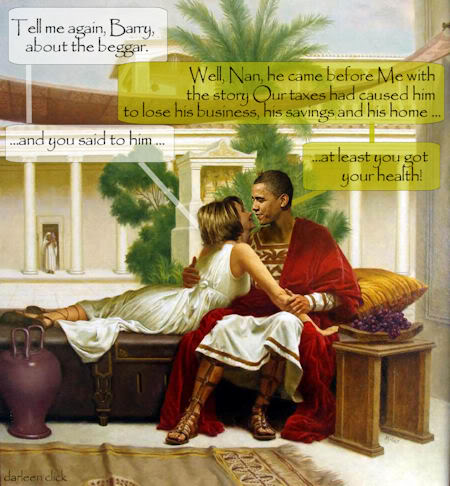 In this version, Nancy Pelosi, who is equally vilified, replaces Lady Liberty in a venue calling up the decline of the Roman Empire. To the unaware, Click is seemingly mixing metaphors in which she conflates Obama’s presidency with a legitimated part of Euro-American civilization (ie the Romans) at the same time she hopes to criticize his leadership. Yet, she deconstructs the idea of Rome as civilized past through Judeo-Christian symbolism in which conservatives will recognize the Romans as people who oppressed not only Jews but also Christians and killed Jesus. Thus Clark gives us a Rome that we should recognize as not only in decline but on its way to ruin precisely because of its lack of “Godliness” another key trope of the right which equates blackness with demon/heathen and has mobilized this discourse both through anti-Muslim sentiment (calling Obama a Muslim while at the same time criticizing his Christian Pastor) and condemnation of his efforts in Haiti (remember Robertson and his “deal with the Devil” comments?).

The racialized sexist metaphors shift only slightly here. Pelosi still acts as sullied virtue in this image only this time she is sullied by her willingness to “be in bed” with a black man. Thus the narrative of racial purity replaces that of racial aggression in which white women still appear as arbiters of virtuous and as property. The virtuous woman in this cartoon is still Lady Liberty. Though not pictured, she acts as the absent woman who has been taken advantage of by the wanton woman who by aligning with the black man has clearly lost perspective on the nation and accomplice to its demise. This interpretation also relies on engendered classism, in which Lady Liberty is the working class every woman to Pelosi’s aristocratic decadence. She is the silent partner to the “beggar” who comes to Obama and Pelosi looking to save his livelihood. Once again the image tells the tale of a white nation under siege in which virtuous women suffer because of a despotic black man and the race traders at his side.

I’ve said this before, I often marvel at how certain, outspoken and/or activist, white women will sublimate their own gender equality in the face of white privilege. In each of Click’s images women are acted upon, not actors. They have no power and no leadership, they are simply symbols for the political jockeying of men (beggars or politicians doesn’t matter). Their sole contribution to the nation is depicted as one of sexual fidelity or lack thereof, in which their sexual purity (ie racial purity) is the measure of their commitment to the nation. For women like Click, who is clearly committed to an active role in her political future and in building the version of the nation she would like to see, how does this image gel with their own contributions? How can they depict themselves as perpetual victims and sexual objects when they so clearly do not live their lives this way? Like the history of class antagonism in this country, which was consistently quelled by mediated extension of white privilege, these women seem to believe that access to whiteness trumps access to engendered subjecthood.

Ultimately, it is not President Obama who will cost this nation its success but the multiple fears mobilized by Clark and others and the willingness to sacrifice one’s actual liberty for the promise of access to limited and often fleeting, at least for the working class and rural communities building the groundswell of the neo-con movement, to whiteness.

3 thoughts on “Another Racist-Sexist Comic About Obama? Say it Ain’t So …”